Sometimes a concept is so out there, so over the top, so crazy, it just works. Welcome to Chris von Hoffmann’s Monster Party. You won’t find the Wolf Man, Dracula or The Mummy at this shindig. It’s a house full of psychopaths who may or may not be reformed.

Pssst. If they stayed reformed we wouldn’t have much of a movie would we?

Why would anyone crash such a blowout? You would have to very desperate which is exactly what Casper (Sam Strike) are his pals Iris (Virginia Gardner) and Dodge (Brandon Micheal Hall) are. The small-time crooks need a big time score more than Fox TV. Iris and Dodge have a little bandit on the way and Casper’s dad owes a lot of money to some unforgiving people who have already relieved him of his pinky finger as incentive for Casper to deliver on his promise to settle the debt. 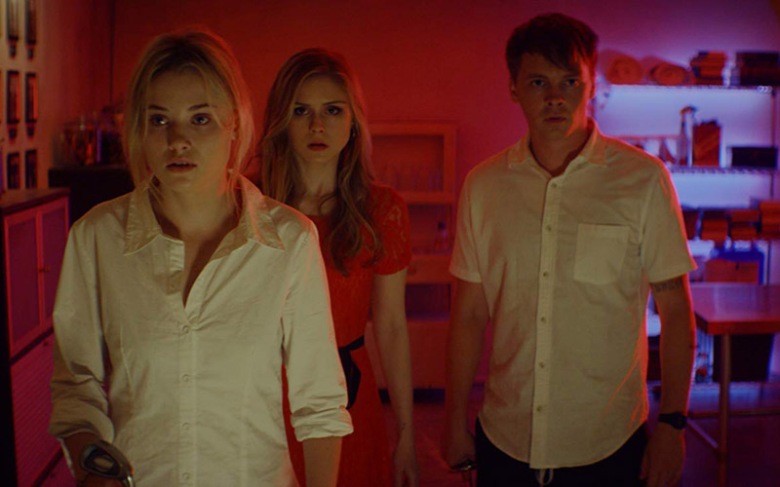 Disguised as caterers the thieving trio case the joint belonging to the Manson, I mean Dawson family. What they don’t know is the celebration isn’t to mark any everyday achievement like birthday or an engagement. The guests and the Dawson family are raising their glasses to the sobriety of everyone on hand but it is not alcohol, drugs, gambling or sex that is at issue. It is cold-blooded murder. Under the tutelage of Doctor Milo (Lance Reddick) each of them has successfully overcome the urge to stab, shoot, choke, poison, torch, dismember, eviscerate, chainsaw, blow-up any of their fellow human beings.

Having the bumbling and blundering Casper, Iris and Dodge around proves too tempting to the homicide addicts and they fall off the wagon. And so begins many gory games of cat and mouse.

On the lawful neutral side of things, it is Sam Strike and Lance Reddick who are the highlights of Monster Party. Reddick brings that authority and poise to the role of Doctor Milo, the voice of reason when everything goes off the rails. As he did in Nightflyers, Strike has that cool, rebellious, sympathetic vibe that has you firmly seated in his corner when that bell does ring for Round One.

On the lawful evil faction, Kian Lawley, Erin Moriarty and veterans Robin Tunney and Julian McMahon (my favourite Doctor Doom of all-time) ham it up and tear it up as the stand-out psychos. Lawley and McMahon chew up the scenery being as unhinged and manic as they want to be. Tunney and Moriarty bounce back and forth from placid calm to crazed, furious rage.

The rage that is just clambering to come out translates into some savage kills not just from the psychos but from the heroes too, the most ferocious being when Lawley goes ballistic and angrily chops up a victim into tartare that he would probably happily serve at the party with onions and capers like Hannibal Lecter would if he could.

Monster Party isn’t a radical remake of the slasher genre but what sets it apart though from many of its predecessors is the performances of those involved. Led by veterans Tunney, McMahon and Reddick, the cast of young stars pushes Monster Party beyond the garden variety slasher film it might have been in less skillful hands.

My only quibble is that the filmmakers didn’t really use the “monster in the basement” aspect of Monster Party to its full potential. It doesn’t make the impact that it should and the movie would have been much better for it. It would have added some buckets of blood as well which is always a good thing at a Monster Psrty.

Hacked up with a meat cleaver.
One suicide.
Bashed with a walking cane.
Shot in the head.
Mauled, bitten.
Stomach sliced open.
Head split in two with a sword.
One lethal chainsaw accident.
Another stabbing.
One lethal tumble down the stairs.
Throat sliced with a sword.
Five die of various sword injuries.

A visit to a strip club.

Roxanne Dawson: Let’s go chop some tomatoes.
Milo: You haven’t learned anything!
Alexis Dawson: Why don’t you fuck the fuck off?