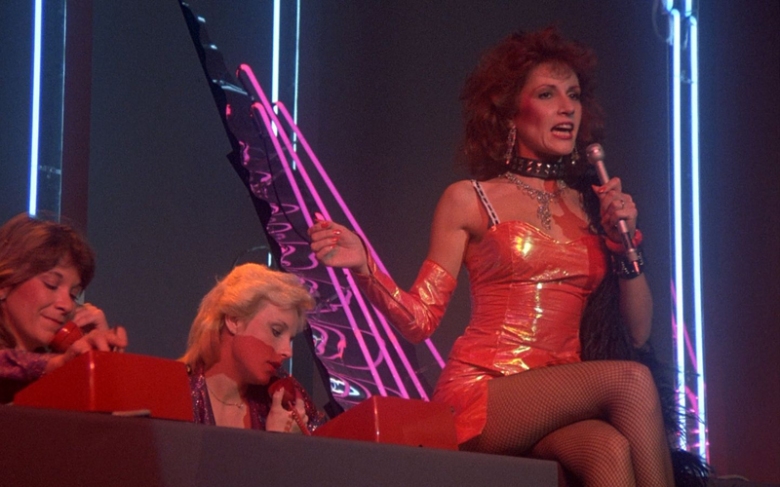 Music has always been one of the most important aspects of any horror movie. It sets the mood, the tone and jump scares would be nothing without it.

One movie I wish music didn’t play such a strong role is 1980’s New Year’s Evil, a film more concerned with being a bad music video than a good horror movie.

Director Emmett Alston who went on to lens the immortal shinobi tributes Little Ninjas, Force of the Ninja and Nine Deaths of the Ninja, clutters the running time with mind-numbing concert footage of Shadow and Made in Japan playing in front of an obviously staged audience because nobody with functional hearing would attend one of their concerts.

Roz Kelly – famous for playing Pinky Tuscadero in Happy Days – is punk rock TV host Diane Sullivan, who acts and looks more like she should be hosting Flock of Seagulls than The Stooges. She’s about as punk rock as Ariana Grande.

While hosting a live New Year’s Eve broadcast Sullivan is harassed by a threatening caller who sounds like William Shatner doing his very best Donald Duck imitation on the telephone. 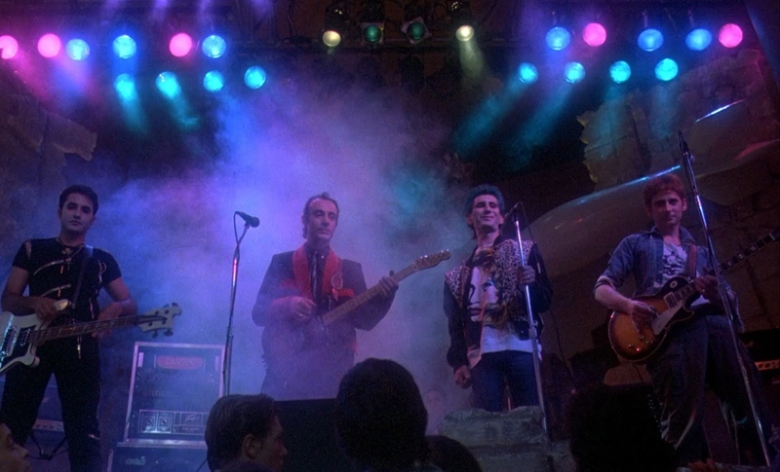 Calling himself Evil, the stalker warns Sullivan that he is about to go on a psychotic rampage and she will be his final victim.

Evil has apparently put as much thought and imagination into his modus operandi as he did his moniker as his kills, almost all of which happen off camera, are just the boring stabby, chokey kind, except for his Snidely Whiplash elevator death trap at the end of the film.

Evil could sure take some lessons from Jason Voorhees or Michael Myers.

The only original thing Evil does is record his victim’s deaths with the gargantuan tape recorder he discretely lugs around with him playing the recordings back to a frightened Sullivan.

To skirt the long arm of the law and deceive his victims, Evil disguises himself as a doctor at a mental hospital, an entertainment mogul complete with caterpillar moustache, a priest and at one point gets into another fine mess wearing, get this, a Stan Laurel mask.

The priest get-up provides the most snickers though as while decked out as a pastor Evil runs afoul of a motorcycle gang and must seek sanctuary at a drive-in playing a Blood Feast trailer. 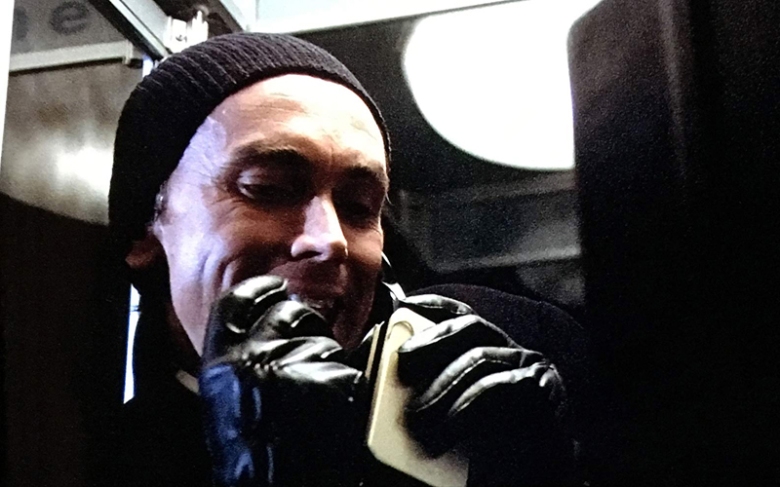 Along with having an uninspired serial killer targeting her, Sullivan also has to deal with her emotionally unstable actor wannabe son (Grant Cramer, Killer Klowns from Outer Space) and her jerkwad of a husband (Kip Niven).

New Year’s Evil sets itself up as a cagey Giallo but all of its obvious red herrings, transparent twists wouldn’t fool anyone who has read Nate the Great or The Babysitters Club as a kid. The movie’s twist is obvious from the very start.

With an excruciatingly awful seventies soundtrack filled with cheesy synthesizers, bongo drums, wah-wah pedals and that rattle snake sound used to indicate trouble or danger, New Year’s Evil has the production value of any run-of-the-mill television action series from the seventies and as such is as moldy as that block of cheese you forgot about behind that carton of expired egg whites you have in your fridge from when you thought about perhaps eating healthier. Just like those eggs, all copies of New Year’s Evil deserve to be transported to their final resting place by a garbage truck.

Knifed in a shower.
Stabbed to death.
Asphyxiated with a plastic bag.
Choked and stabbed in a garbage dumpster.
Leaps off the roof of a building.
Knifed in the stomach.
Killed off camera.

Some breasts and some imitation sex.

Evil: I’m a man of God, not a man of violence!
Diane Sullivan: Well, listen Mr. Evil. Do you have a vote for the top song of the year?