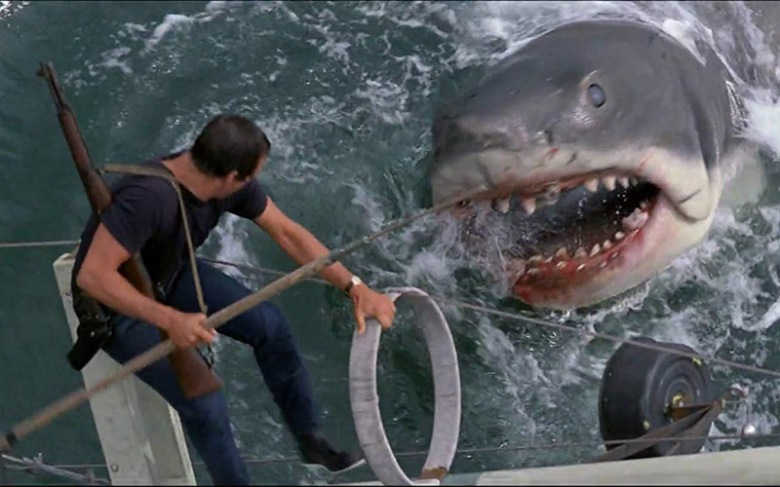 The film that not only propelled Steven Spielberg to superstardom but also introduced the term “blockbuster” into the modern film vocabulary when Jaws made over $100-million at the box-office in 1975, a phenomenal feat at the time.

The film was also a world-wide phenomenon, a true hysteria that wreaked havoc with the general public wherever it played. People were so spooked that summer many refused to go swimming or boating for fear of what might be lurking in the water below. When a film can have that kind of effect on the human psyche you know it is a classic and a powerful piece of filmmaking.

Amity Island’s chief source of cash is its tourism, namely its beaches, a fact the townsfolk are quick to badger Brody about whenever they can. Public safety and money matters clash when a massive great white shark starts feeding on swimmers and boaters forcing Brody and his Mayberry police force to ponder….GASP!…closing the beaches.

Despite the dire warnings and a mounting body count, the townsfolk continue to provide a free buffet for the deadly predator. Their idiocy reaches a point that will actually have you cheering for the great white as she gobbles up ignoramus after simpleton after dumbbell after blockhead.

Brody finally receives approval to hire shark hunter Quint, Robert Shaw in the role of a lifetime. Even though he is as surly as a short-tempered bear that has just risen from hibernation, you will admire Quint for his undeniable courage and the unusual, strange nobility he somehow has when he is at sea and in his element.

The very best thing about Jaws is the second hour of the film is totally dedicated to the showdown between Brody, Quint and Hooper and the shark. No more townspeople squabbling. No more biology lessons. There are a few human moments of the men bonding during breaks in the battle but for the most part it is – The Calamity in Amity! – a knockdown, drag-out fight to the death between men and beast. Like the entire film, the thrilling finale spotlights the best special effects at the time, the emergence of one of the best action filmmakers of all time and three of the very best actors of any time. Not to mention the haunting, relentless score by John Williams which earned him an Academy Award. His shark attack theme will be parodied and replicated until the end of time.

The enormous impact Jaws had on the movie industry, the horror genre, movie-goers and our misunderstanding of sharks is unmistakable and undeniable. From the opening swimming scene to the final confrontation, Jaws grips you by the throat and never lets go even after the credits have rolled.

A swimmer is flung about like a chew toy and slowly devoured.
A doggie becomes a snack.
A kid is munched.
A corpse is found in a sunken boat.
Dinner is served. Gulp!
A bullet to a pressurized scuba tank causes a massive explosion and total disintegration.
Another victim is gobbled up bit by bit.